Aqueducts is the ninth level of Quake 4. Corporal Kane has to catch up with the rest of the squad at the Nexus Hub using the Hover Tank that Sergeant Bidwell left for him after they run quickly. Due to the fact, the enemy forces have notice that the EMP Bomb is a major threat to their communication line of the Tetranode.

At the beginning of the level, a tech marine will upgrade your Nailgun to give you the extended clip for the weaponry and shoot nails much faster. You can also let him fill your armor if you've taken damage from previous level. Along side with the medic will also able to heal you if you were injured. At the exit outside. You see the SMC Hovertank. Hop in and ready to do more action against the enemy forces. Outside, where bunch of Hornet that needed to be killed before processing to the other side.

The route of this level is one-way, only you have to worry about is the Strogg units attempting to wreck your tank. Smaller Stroggs are not the problem, instead of shooting at them, you can just run them over, even Gunners and Berserkers can be killed this way. One cannon shot can mow down multiple enemies or disable Gladiator permanently, as they will appear on catwalks during tunnel sections. The Gladiator will do some damage to your tank, so he should be taken seriously and taken out as soon as possible. Like the truck two levels ago, your tank will not fix itself until you stop taking damage.

Later on, in the next few areas, get ready to fend off more and more enemy forces as they bar your ways. The air-dropped turret and Hornets will attack first. The turret is a little annoying because they cannot be killed until they deployed, and usually take 2 cannon rounds to kill one. However, you can kill them at the first shot if you hit it as soon as it deploys. This is a tough area even for a tank, so you may want to keep mobile to avoid as many projectile as you can, you cannot eject from the tank until the end so if the both bars depleted means game over. Feeling tired? The real threat just about to appear. The Heavy Hover Tank make it début here, as it firing missile that will follow you. Eliminated them immediately before you take too many hit. Afterwards, you go through that though to be arena as the Hornet ready to drop Conveyor to attack you as they're invulnerable during into rolling state as forcefield protecting them. So don't bother until it attack you then shoot and destroy. Then more Hornet ready to showed up and drop more of those mechanical trying to disposed of you as it is only futile and you easy destroy it. Until the Heavy Hover Tank appeared once again. To make matters worse, the Heavy Hover Tanks has help, from more Conveyor. Keep on guard and following the same tactics as you deal with earlier and you won't have any problem.

Afterwards, you come to the another outside. Where loads of Conveyor ready to ambush you get past them as quick as you can and ready to fall off to the ground. Where you meet the Flyer deploying the Strogg forces. Take them out and head through the left door and thus the level end. 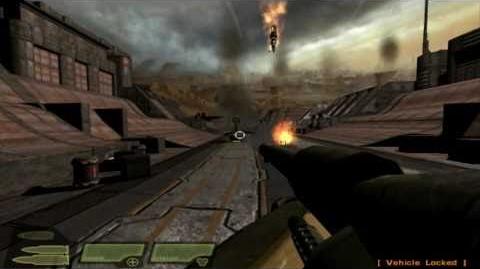