Aqueducts Annex is the tenth level of Quake 4. Corporal Kane continuing processing to Nexus Hub by the Hover Tank. Crossing even more of the enemy line of the fortified passage that try to preventing him to get to there. Ultimately, he did and meet up Morris and Strauss.

Now there is the reason to panic

Continuing where it left off. Going outside from the tunnel as witnessing two of the squad riding the Hover-tank to scanning anything of suspension only declared nothing. Suddenly, a Harvester come out from the hole caught them by surprised stab them to death as they defend themselves is futile. Now, you have to fight the Mechanizable by yourself. Despite it looks threatening, it is very easy just turn around in circle and continuing shoot it. There is a trick for Higher difficulty players: see the two big tube that Harvester use to fire guided missiles at you? Aim at that thing and keep feeding it with cannon round, doing this will keep the Harvester from firing guided missiles at you and it will stun. Sure it will still fire blaster shot at you even when its immobilized, but these projectiles are easier to avoid and do far less damage than the guided missile would. Also, the Harvester will fire a non-stop stream of guided missiles at you like Heavy Hover Tanks, they want you dead so badly so make sure you take any advantage away from your oppoenets. Don't get near it or drop into that hole and you will have no problem about it as the laser field is disabled and you can continue process to the Nexus Hub.

After some tunnels and regular Stroggs encounters, you will be close to the Nexus, where you find that guarded by two Harvesters, this time you have the advantage of the field of view, so its actually very easy if you know what to do. You can use the scope while using cannon, while it will not help much but you can see the missile tube easier, even if they fire the missile, drive back to lower area and the missile will never hit you, and keep your distance will make them near impossible to hurt you. After you get rid of them, keep driving to the tunnel and you can leave the tank.

While inside the tunnels more and more enemy forces are going to bar your way. Meet up with the rest of the Rhino squad and the level will end. 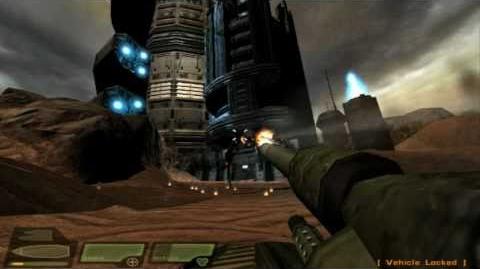