Armagon is the final boss of the first Quake mission pack, Scourge of Armagon. He takes the appearance of a Gremlin-like creature who has been heavily modified with powerful firearms and robotic legs. These enhancements give Armagon the weapon capabilities the likes which have not be seen before in Quake. Armagon's Rocket Launchers allow him to devastate the player within seconds and his mechanical legs also give him great speed, allowing Armagon to outrun the player, easily closing the gap between the two.

He is constituted by two separate models: his flesh and his legs.

Armagon is Quake’s general and master of ‘this realm’. Armagon replaced Shub-Niggurath as the leader of the creatures of Quake when she was destroyed by Ranger. Armagon's master plan is to open the rift to destroy all life on Earth. It's the player's mission in Scourge of Armagon to defeat Armagon and close the rift.

Similar to the Laser Cannon that the player uses except its rate of fire is severely decreased and thus, this attack is not really a threat, its only real purpose is to bounce off walls and hit the player hiding behind the pillar. Compared to his Rocket Launchers, Armagon's Laser Cannon is really only to do small easy damage when the Rocket Launcher is no use. Each shot with the Laser Cannon does 18 damage, which is doubled to 36 damage when he uses both, and can fire at such speed that the player can lose 100 health in two to three seconds if he is caught in the fire.

Armagon is notable as being the only Enemy in Quake that uses the Rocket Launcher and not only that, he has two of them and can fire them in very quick succession, with a firing rate to rival the Nail Gun. Armagon is also very accurate with them and because of this, it is almost suicidal to confront Armagon in open ground, meaning it is vital to make good use of the cover provided by the pillars that surround Armagon's Lair. It is possible to get Armagon to start his Rocket attack and then quickly hide behind the pillar and force Armagon to attack the pillar, hurting him self if he is close enough. Each shot of the Rocket Launcher does 105 damage, which is doubled to 210 damage when he uses both, and can fire at such speeds that he player can be killed outright even if he/she has full armor and picked up the Mega-health. With such power, accuracy and speed, Armagon can deal 630 damage in a single second. This makes it clear why facing Armagon in open ground is an almost impossible feat.

Armagon can also create a powerful shockwave, which tosses the player away, if he tries to hide behind Armagon's back.

Armagon is one of the toughest Enemies in Quake but there are a few advantages that the player can make use of in order to make this fight not too difficult. The arena is surrounded by pillars so make great use of these as cover, to avoid Armagon's hellish attacks. Make sure you have full ammo for the Thunderbolt, Laser Cannon and Super Nailgun, which are the best weapons against him. Start by using the Laser Cannon. Fire a little bit then hide, keep repeating the process until you run out of Cells. Repeat the same process but this time with the Super Nailgun, it will finish him off quickly before he has the chance to kill you.

Alternatively, if you have enough grenades from previous levels, you can stand from a distance, aim upwards and launch grenades into Armagon's enclosure, killing him before he even emerges. 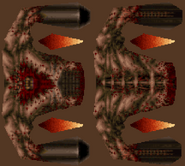 Texture map for his flesh 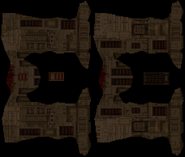 Texture map for his legs
Add a photo to this gallery
Retrieved from "https://quake.fandom.com/wiki/Armagon?oldid=80110"
Community content is available under CC-BY-SA unless otherwise noted.