An even more powerful version of the famous BFG 9000 from the Doom series, the BFG 10k (simply called BFG in the manual) is the most powerful weapon in Quake 2. When fired, it releases a large green sphere of compact energy that travels forward until it hits a wall or other obstacle. As it's traveling, it will exert its excess energy in the form of green beams that lash out at any enemies near it, usually killing them quickly. When it hits something, the sphere will explode, taking out any enemy that is within range.

Its only downsides are that it uses 50 Cells per shot and it takes a while for it to fire and reload.

The BFG’s damaging system is quite complicated. If the player experienced the BFG 9000 from Doom 2, the principle is very similar. The BFG's splash radius on impact to solid wall and ceiling is enormous but how much damage it deals to surrounding enemy depends on the location of the enemy, point of impact and the player. If there is an unobstructed line of sight between the enemy, the point of impact, and the player, the enemy will receive the full force of the shockwave and even strong enemies that are hit by the beams beforehand can be killed or even gibbed by the splash damage alone in this manner.

Whilst this can be used to deal great amounts of damage to a lot of enemies in a room, it does have its disadvantages. Fighting enemies such as the Tanks and Gladiators requires constant moving or popping in and out of cover, taking potshots. Brains are vulnerable to BFG shots, but absorbs the BFG blasts in one hit at a time, just a few crowds. But if the player fires the BFG at a Tank Commander and takes cover before the blast hits, then the Tank Commander will receive minimal damage. If the player fires and stays in view until the blast hits, then the Tank Commander's devastating attacks could kill the player. The BFG requires skill and practice to be used at its full potential, but once comfortable with it, the player will find the BFG as the most useful tool in his/her arsenal. When it is combined with Quad Damage its power is unrivaled by anything else. 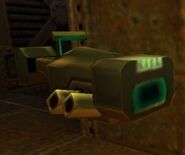 Profile
Add a photo to this gallery