The Widow is the one and only enemy in Quake II to have two forms. Her first form is a very tall humanoid with an organic torso and above and mechanical legs. When the player defeats her first form, the Widow will teleport away, leaving her legs behind in an explosion. After a while, the grand doors will blow up revealing her second form, a spider-like beast with upgraded weapons and more armor.

The Widow will walk around the arena which is a large circle with a round of pillars surrounding the inner circle, much like a web. The Widow has average speed and can be easily outrun by the player. Her weapons are fairly useless as her most common weapon is an upgraded light blaster which attacks in an arc. Use the pillars for cover, and when taking shots, always keep moving. Jumping around the outer area not only avoids the Widow, but also keeps the Stalkers away. There will be an unlimited supply of Stalker being summoned into the arena by the Widow. During this first fight, the Stalkers are more of a problem. The BFG is a good weapon to use because it will deal massive damage to the Widow but also attack/kill the Stalkers. Many describe this form as a mega version of the Iron Maiden.

The Widow's Light Blaster is used in the way similar to the first Makron and is easy to dodge. This is the most common attack used by the Widow and is pretty pathetic, like the Makrons. Keep moving to the side to avoid this attack whilst returning fire. The Widow will fire about 10 shots in an arc and 10 shots directly at the player (although not always in this order). Each shot does 10 damage and with Stalkers also attacking, the player will find his health drop like a rock if he stands still. 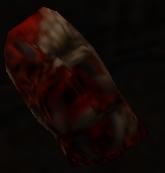 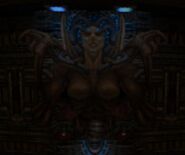 The mural of the Black Widow
Add a photo to this gallery
Retrieved from "https://quake.fandom.com/wiki/Black_Widow_Guardian?oldid=26990"
Community content is available under CC-BY-SA unless otherwise noted.