The Blaster is the starting Weapon in Quake 2. Because of its slow rate of fire, minimal damage, and slow projectiles, the Blaster is considered a weapon of desperation. 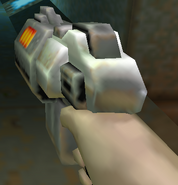