Canyon is the seventh level in Quake 4.

At the beginning start, Matthew Kane ride a convey along with other minority marines that getting passed to the other side and battle Strogg forces that try to reclaimed the sectors. When arrived to the checkpoint. First, he meet up with Sergeant Bidwell to the exit of processing. Second, he help escort the bomb that's going to be used to destroy the Nexus Hub safely over there without of any of the obstacle blocking their path to achieve their main objective.

A ride on the Death Convoy

After you exit the ship, you must find three trucks. Ride on the first one, and it'll take you to your squad. There is really nothing you need to do at this point, killing enemies is optional, you'll be fine even without firing a shot, but when you meet up with some Guards, it'll go faster if you helped your teammates. Use your Grenade Launcher or Machine Gun to kill them, anything else is really ineffective.

After the trucks get to checkpoint one, feel free to talk to the marines, then meet up with Sergeant Bidwell. Hop on the truck that's next to Bidwell, and take a ride down to the Hub. At this point, you have to kill the enemies, because the truck has health bar now, use the mounted gun to kill any of the Stroggs and Turrets you'll find along the way, target the turret first, because it will do the most damage. Once the truck reaches a group of 4 land mines, Rhodes heads out of a truck and tries to disable them. Protect Rhodes from the incoming Grunts and Berserkers, and keep protecting him until he's done and heads back to his truck, shoot the one who is the closest to him, if he take too much hits the mission fails. Although the enemies will also damage the truck you are on, defend Rhodes is more important, aim for the head and chest for quicker killing.

It's either them or you

After that, the trucks move again, and kill any Guards and Turrets along the way. Once you reach the an open canyon with a bunker, destroy all the Turrets in the area. There are Turrets on the four sides, rocket Turrets on the top side of the bunker, and more Turrets will appear out of the sky. Besides shooting the turrets, you might need to shoot the rockets down if you have time, as they will fill the screen with missile warning. Once you destroyed all the Turrets, the truck will stop at the bunker, and you can go inside and start the next level. 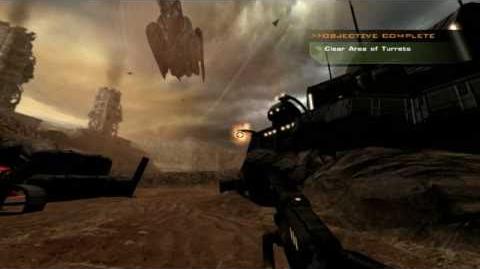