Crash is the tutorial bot who introduces the player to Quake III Arena. Welcoming the player at Q3DM0: Introduction. This match is an easy one; needing the first to five frags to win.

The bot has the highest auto response ratio, where every time you say something to her, she says something random back. She is the only bot who does this, giving the impression of talking to the player.

Other bots refer to her in chat such as "Doom Girl", "Doom Lady", "Doomette" and "Shiny-Butt", that first three of which reference her as a female version of Doomguy.

Once, she was Doom's military instructor. Now the Arena Eternal tests Crash's mettle to the extreme-extreme patience, that is. She is the trainer who introduces new warriors to the skills of battle.[1]

Crash puts your battle skills to test at the very start of the game. You'll spawn in a single room with a mirror and a teleporter. This room also has a Light Armor, a Shotgun and some 5 Health bonuses. The room also has a mirroring teleporter which will teleport you to your first eternal arena.

As you step in the actual map, keep the Light Armor room to your right in control, stay out of her way when she enters the little Shotgun room just in front of you, as she will get out with an accurate jump blast. As much as she has stingy comments, she has a stinging weapon of choice too.

Crash, like a few other bots, such as Bones, Mynx and Sorlag, prefers the Shotgun all the time. She has high priority on the use of Shotgun. Even if she picks up other weapons, she does not change them. Yet none of the mentioned bots can keep up with Crash's reaction time and accuracy.

Try to get more personal and try to keep the Shotgun room under control to engage right away when she respawns there, then slip to the Light Armor room. You can weaken her with a few rounds of the Machine Gun then do the finishing touch by switching back to the Shotgun.

When she enters the middle room, things may get rough. Getting the Plasma Gun at the right room may help while trying to keep the Light Armor spawnpoint under control from halls by pressure fire. 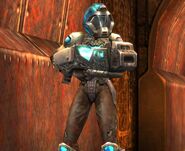