Data Networking Terminal is the 28th level of Quake 4.

Followed by Data Processing Terminal of its tram, where the Network Guardian outraging since you get this far. Now is the final tower to be activated directly to Nexus core that disable the security with the help of bunch of the other squad members. Matthew Kane can finally go inside and end the nightmare war once and for all. This level is not long, but pretty bloody, due to the number of the enemies and lack of cover. Teammates actually won't help much here, but its better than going on your own, remember to find medic when you need health. (He should follow you until he dies or he is his fellowing teammate make it to the end of the level and guarding the tower to preventing any more of the enemies forces appeared out of nowhere.)

Securing the Lower and Middle Section of The Tower

Following right after where you have ride the tram from the Data Processing Terminal to Data Networking Terminal as you quickly heard from the transmission of Strauss as he will introducing you to the last of the tower you must activated before heading to the Nexus. Once you arrived, collect all the supplies that lying around you to refill up your weaponry of the preparation before riding up the elevator to the middle section of the tower as you arrived. You overheard transmission of other squad are trying to save their leader as before it burn to death. But it was all too late as they must deal with the threat of Guards. Thankfully, you arrived just in time as you can take them out easily with the exception of Gunner. Once you deal with. Head to the center. When suddenly all lights go out as security defend have been activated as Turret. appear both right and left. Take them as soon as possible and stand on your toes as the teleport coming down ready to spawn enemies. Destroy it and prevent any of your team-mate being killed. You're going to need them to process especially in the highest difficulties. Once you taking them out. Head left where the door have been locked just now have been open. Inside, where the bridge needed to be extended before going. Simply just activated and wait everything is set and across as you processing. You and your team-mates entering in the dark room. Where the elevator panel, that will call down to ride you up after activated as transmission heard. The Artificial Intelligence aircraft are engaging the enemy flyer as being intercepting with another. Once the elevator come down a gunner are waiting you be sure to take him before go up At the same time, the defense security is activated once more as teleporter door open spawning Tactical Strogg. You can either stay here to refill your ammunition to full maximum by killing all of them after destroying the two teleport or just escape to the top. However, It is not recommend to stay down as your team-mate most likely will not make it as it is required for you to assisting all the way to the end of the level. Once you go up and get ready at the left corner where the Light Tank awaiting to start burning you and your team-mate once you arrived. Get out of there as soon as possible and battle the same thing that happened just now in the lower level. Be sure, to take out the Light Tank immediately after you douche it attack and don't let him chase you as the room are small are very hard to avoided. Once you take him out. Destroy all the teleporters to preventing more enemies spawning. Afterwards, just keep processing if your team-mate is still alive. Make sure, you saved just in-case as the upcoming will be tough as you pass through the door as you will be facing the Tactical Strogg with couple of Gunner. This time with the Rail Gun. Take the teleporter out immediately and you can focusing on them without any trouble. Your team-mate may died especially with one shot from the Rail Gun are instant death to them after you taking care of everything. Passed through the door in-front and get ready. Berserker will spawn right in-front of you. Back off and keep shooting with your powerful weapon until it dead. Once you process. The left side and the other side of the teleporter will spawn Tactical make sure to keep it on eye on them. When you process. At the same time, Gladiator will coming out in-front get ready to face them. If your team-mate is still make it this far. It shouldn't be that difficult flank them on both position will make it easily. Once you taking them out, be sure to check any supplies specially from the the top where the Tactical have spawn after passing the door when the gladiator have enter. Afterwards, you enter another door. Which is a teleporter that will lead you to go up as Transmission from Strauss. It is the only way to get on top of the Tower. Enter it and the level ended. 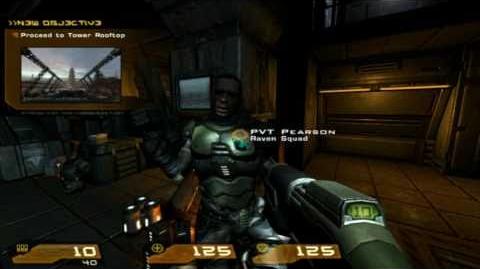