Data Processing Terminal, visited a second time, is the 27th level of Quake 4. This is one of the few levels in game that can be completed without firing a shot.

Right after Matthew Kane has activated the tower of the switch that deactivates the security. Strauss will tell him to take the tram, where you left off and go to the Data Networking Tower. While Sledge remain there to guard any of the possible threat to shut it down. Now, he is going down to the tram where the tram awaits going to the final tower.

It is nothing special, just on the elevator going down. Watching the Network Guardian appear and outraging throwing on the rampage to provoking you ever since you come this far. Until he pull down the elevator and w-hake you to the down to the terminal. Don't worry, the guardian will not harm you, despite he try so hard to beat you to death. That will lead you back to the tram. Where you left off and move on to the Data Network Tower as the level end. 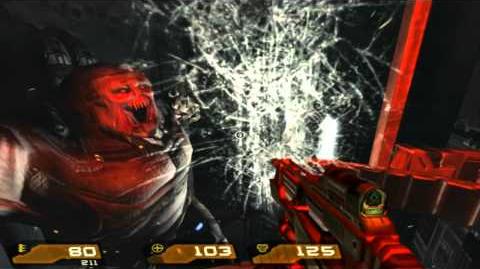