The character known as Doom appeared as a protagonist in the Original Doom game.

Doom shows himself at the Tier 6 as an Arena Gladiator. He favors the Railgun and is quite accurate with it, he can be fierce and dangerous when he gets his hands on it. He's one of the most challenging bots in the game and his tier, it's assured that he would put you under lots of stress when encountered. He favors the Railgun and Rocket Launcher first, then tries to grab Quad Damage power-up whenever possible. He will also look for the BFG10K, if the skirmish map has it. Can use all weaponry with a few slight misses but with great hit ratio, and has a very slight reaction moment which way above of most players and arena bots, this guy is just one finger down from an Arena Leader.

In the chat lines he also get mentioned as "Mad man", "Loony" and "Schitzo". When he's losing the match, you can witness him losing levels of his sanity. Talking about voices from the pitch, massacres in the corridors of UAC and dead friends. You'll see that he's a reckless war veteran, even if he's called a lunatic, don't turn your back to him or he'll make you pay for your foolishness.

Long after everyone else on Phobos was dead, he kept fighting, determined to send out a warning to Earth before the demons could claim him.[2]


Distracted and intelligent sounding, (but not a member of the intelligentsia, more like a well-educated tradesman) this guy may be a few cards short of a full deck, but his training serves him well. He's a bad-ass in the arenas.[1] 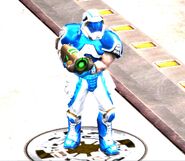 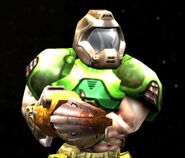 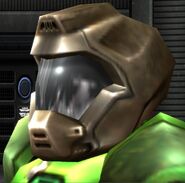 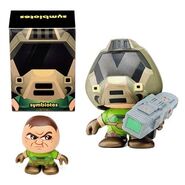 Doomguy - Blue
Add a photo to this gallery

Retrieved from "https://quake.fandom.com/wiki/Doom_(Q3)?oldid=67707"
Community content is available under CC-BY-SA unless otherwise noted.