The Dragon is the final boss of Dissolution of Eternity. The Dragon is very powerful, arguably the most powerful Monster in the realm of Quake.

One to four balls of fire are launched at an alarming speed. The balls fly at a slight arc, causing them to hit a wide area around the target making it hard to dodge. Each ball does 80 damage, which adds up to a possible total of 320 damage per attack. The fire balls can launch the player into the air and across the cave, very easily knocking them into the lava.

One to two balls of lightning are launched at an alarming speed. The balls fly at a slight arc, causing them to hit a wide area around the target making it hard to dodge. Each ball does 140 damage, which adds up to a possible total of 280 damage per attack. The lightning balls can launch the player into the air and across the cave, very easily knocking them into the lava. This attack is much more dangerous as more damage is inflicted by a single ball.

If the player gets close to the Dragon, it will strike them with a spiked ball at the end of its tail, dealing 30 damage.

The battle with the Dragon is fitting as the final battle of Quake and its official mission packs, as it's a tough fight. The Dragon's extremely powerful attacks means that the player will be unable to survive few too many hits before being utterly devastated.

The number one fact to keep in mind to successfully defeat the Dragon is that it can only attack if it can see the player. So if the player stays behind the Dragon, they will be safe. However, this is easier said than done. Another factor in this fight are Earthquakes. They are persistent and can last a long time and make the rush to keep behind the Dragon a lot more difficult. Also, these earthquakes can easily result in the player falling into the lava.

There a few useful power-ups in the cave that can help make the fight easier. However, be careful going for them and keep an eye on where the Dragon is. The Anti-Grav Belt helps a lot during the time it's active as it makes moving around the cave much easier. Just be careful to not land in the lava, since the player's movement will be limited at air The Power Shield is located at the far end of the cave and is also a great help to survive a couple hits. However, with or without it, it's always best to avoid being hit. There is a 100 Health on one of the high ledges, but try to save it when the player's health is low.

The best weapon to use is the Quad-Rocket Launcher as not only does it deal devastating damage per shot, it's limited homing capabilities are a great when the player is trying to aim up, fire, and navigate the ledges around the lava. There are plenty of Multi-Rocket picks up in the levels proceeding Source of Evil and as long as the player wasn't too reliant on this powerful weapon, they should have enough ammo to see out the fight. The Lava-Super Nailgun, Thunderbolt and Plasma also work well.

The Dragon is very and notoriously tough and even with the games most powerful weapons, this is a long fight. When the player delivers the fatal hit, the gate leading to the Energy Converter will rise, allowing the player to finish the game.

Texture map for the capital giblet 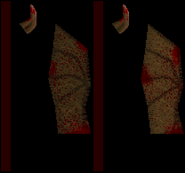 Texture map for the gibbed wing

Texture map for the gibbed leg & foot
Community content is available under CC-BY-SA unless otherwise noted.