Episode 1: Dimension of the Doomed

Episode 1: Dimension of the Doomed

Episode 2: The Realm of Black Magic

Episode 1: Dimension of the Doomed or the Doomed Dimension is the first Episode of Quake and the only episode available in the Shareware version. As such, it doesn't contain the Enforcer, Death Knight, Rotfish, Spawn, or Vore. This episode also lacks the Thunderbolt. It consists of eight levels total, one of which is a secret level. It is the only episode to feature a unique boss creature at its end called Chthon.

Being the Shareware Episode, it is more varied in level themes than the others; besides the idBase appearance of the initial level, Runic and Medieval themes are also used. It's a dimension of drastically changing environments having some amount of age and representing some immense structure - crypts, artificial caves, castles, and pyramids.

The text displayed in the corridor leading to this episode in Introduction reads: "The mystical past comes alive..." The goal is to search for the Rune of Earth Magic to use in the fight against Shub-Niggurath. 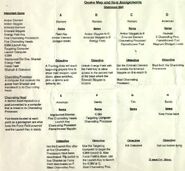 A basic overview of the maps, along with the various items each would contain and the overall objective.

A more detailed overlay of the levels and the overall story within each level.
Русский
Community content is available under CC-BY-SA unless otherwise noted.
Advertisement