In Quake, a Fiend or Demon (as called in the model files, such as demon.mdl) is a four-legged, monkey-like beast that uses its claws to slash a target. In addition, it is very fast and can leap great distances. Fiends stand approximately 6 feet tall (their back rises above their head) and have a muscular appearance.

Fiends have dark beige, adrenaline-flushed skin and a mouth full of sharp teeth. They also have two horn-like appendages growing from out of their head, and the area around their mouth is soaked with blood. Their hands are simply large, curved claws. They have long hind legs to leap with and feet that are large flat hooves. If they are stationary, they are crouched into a ball which makes them difficult to see if the player is in a hurry.

In combat, Fiends make an odd snarling noise and charge at an alarming speed towards their prey. They appear to have hooves for feet and powerful legs and haunches which allow them to jump great distances, and which can cause significant harm to anyone unfortunate enough to make contact with their leap. When they get close enough, they roar loudly and leap to point-blank range, slashing away with their claws. When they are killed, Fiends give out a low growl. 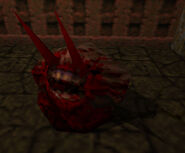 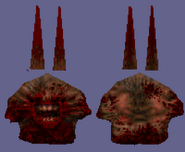