In Quake 2, a Flyer is a small, thin flying cybernetic construct with a humanoid head. It has two rapid-fire Blasters for ranged attacks and uses the blades mounted on its wings for melee attacks.

Flyers first appear in Unit 1, and continue to appear fairly often throughout the rest of the game. Rarely, Flyers have been known to aid technicians, which happens in exactly one level. 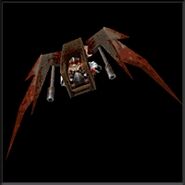 Flyer's texture map when injured
Add a photo to this gallery
Retrieved from "https://quake.fandom.com/wiki/Flyer_(Q2)?oldid=81685"
Community content is available under CC-BY-SA unless otherwise noted.