Gekk is a new enemy introduced in The Reckoning mission pack for Quake II. They are found mainly in the swamps and mountains of Stroggos. They're uncommon in the game and are comparable to gunners in defense, but guards for attack.

Gekks are notable for being one of only three known examples of native Stroggos fauna (the others being the Barracuda Shark and mutant, both encountered in Quake II, the former also turning up in The Reckoning) to have survived the global industrialization program of the Strogg, which have heavily polluted half of their home planet and killed off so much of its native fauna.

Gekks have yellow blood and their gibs are bioluminescent (they glow). It's unknown if this is a natural development or a result of Strogg experiments. 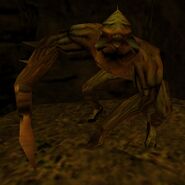 Add a photo to this gallery
Retrieved from "https://quake.fandom.com/wiki/Gekk?oldid=75731"
Community content is available under CC-BY-SA unless otherwise noted.