The Beta Class Gladiator is an upgrade from the Gladiator found in The Reckoning with enhanced weapons and armor. The beta class Gladiator now rivals the Tank Boss and Hornet regarding health and fire power. It is only found during the final Hub in the game where it is a common Enemy. When killed, Beta Class Gladiators may drop Mag Slugs.

Replacing the Rail Gun, the Phalanx fires two slugs together in a single shot, with each shot doing a massive 100 damage x 2 = 200. This makes the Beta Gladiator one of the most powerful enemies in the game, not only because of the power of the Phalanx, but also because it, much like the player, can fire a salvo instantly with no warm up like the Rail Gun demands. It is able to launch one at the player's current spot, and then launch the second one towards where the player has jumped to dodge the first shot, thus making it a lot harder to avoid. This, compounded by the Phalanx's natural splash damage, means fights have to be handled very cautiously.

The beta Gladiator, like the original, has a very large clamp which it will use if the player is close by, dealing 20-25 damage per hit with two hits in quick succession, dealing almost as much damage as a Rail Gun shot. 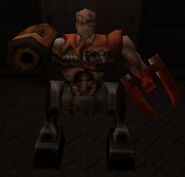 Add a photo to this gallery
Retrieved from "https://quake.fandom.com/wiki/Gladiator_(Beta_Class)?oldid=80077"
Community content is available under CC-BY-SA unless otherwise noted.