In Quake 4, the Guard, also known as the Strogg Marine, is a Strogg guard consisting of a naked stroggified human with mechanical legs and a small arm-cannon for a right arm. Although very weak, they are quite numerous, often attacking in groups of several at once; they are the most commonly encountered enemies you face throughout the game, and are seen in almost every level of the game. However, later in the game they are replaced by the more advanced Tactical Strogg as the major cannon fodder enemy you face.

Guards have relatively weak weapons and low health, and can be brought down with just 6-8 machine gun rounds or a single shotgun blast.

Relatively small (being human-sized) and unarmored, guards are highly vulnerable to gunfire. However, their light weight and relatively small size gives them better agility than larger, more heavily armored Strogg; guards can run at a decent pace, and can also hop sideways several feet to dodge gunfire or projectiles. They have decent intelligence and can move behind cover to hide from attack, although unlike Tactical Strogg they cannot lean around or over cover to fire their weapon. Later in the game, tactical Stroggs will slowly replace the Guards, the latter is still encountered frequently, often act as support for stronger Strogg units or fight against player in numbers.

Besides shooting you with their main weapon, guards can also bash you with it at close range for a melee attack.

Despite having low health, the Light Guard can inflict a good amount of damage if all of its shots connect. They're quite fast, so you might get caught off-guard and hit by them once in a while. Strafe to avoid them.

Any weapon can kill it, but the Machine Gun should be used to conserve ammo. They are quite agile, so don't use weapon that demands accuracy on them. If there's a group of them, explosives will manage to take out the entire group in one or two shots. You can either bombard them with the rocket launcher, utilize the Dark Matter Gun. Or go full out grenade barrage. A fully charged blaster shot to the head will kill a guard instantly.

With other enemies, the Light Guard is cannon fodder. Its blaster shots can get in your way, making it harder to focus on a powerful foe. Therefore, try to take it out as soon as you see it.

Despite being cannon fodder, the Shotgun Guard can inflict a decent amount of damage if it gets close to you before firing. If you see it, stay away from it so that its shotgun will have very little effect on you. You can counter them with your own shotgun if you have the skill and guts.

Any weapon is effective against it, but the Machine Gun should be used to conserve ammo for stronger weapons.

With a group of enemies, the Shotgun Guard should be one of the first killed. It's cannon-fodder status means that it'll annoy you while you try to take out a stronger target.

Despite being weak, the Machine Gun Guard can inflict a decent amount of damage if you're close to it. Try to get away from it if you see it, then attack.

Any weapon works against it, but the Machine Gun should be used to conserve ammo for stronger weapons.

A group of machine gun guards can be quite powerful, so try to destroy them as soon as you can. Explosives can take out most of a group in one hit.

With other enemies, the Machine Gun Guard is cannon-fodder. It will merely distract you while you attack stronger targets, so try to get rid of it as soon as you can. 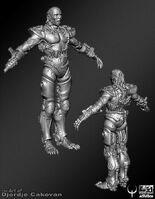