Guardians fire three orange salvos from their staff in an arc. Each beam does 15 damage, making for a total of 45 per attack. The beams move very quickly through the air, making them difficult to dodge at close range.

If the player gets close, the Guardian may hit them with the butt of his staff, doing around 10-20 damage.

The Guardian's staff beam is very fast and thus it's best to fight them from range. Be aware that the beams fire in an arc and so ensure the player has moved enough to the side in order to dodge them. A single multi-rocket can normally kill guardians in a single hit and will also deal heavy damage to any nearby guardians.

Since guardians only appear in areas isolated from other enemies, it's very difficult to provoke monster infights with them.

There are three skins for the Guardians, one to fit each map type that they appear in. The skins are Greek, Egyptian, and Aztec. 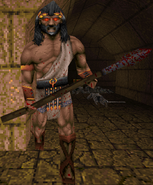 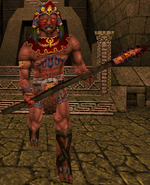 Retrieved from "https://quake.fandom.com/wiki/Guardian_(Q1)?oldid=85394"
Community content is available under CC-BY-SA unless otherwise noted.