In Quake 2, an Icarus is a humanoid Strogg with a jetpack built into its upper back, with twin Blasters mounted onto its shoulders. Whilst it is only ever seen in flight, it does have legs, which is suggestive of a need to land on a regular basis, probably to refuel, rearm and take in some Stroyent.

Icarus are essentially Flyers, but with much higher health and without a melee attack.

Icarus first appear in the Prison hub, and are an uncommon Enemy throughout the rest of the game. 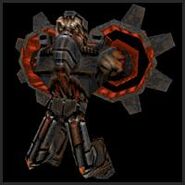 Icarus' texture map when injured
Add a photo to this gallery
Retrieved from "https://quake.fandom.com/wiki/Icarus?oldid=81691"
Community content is available under CC-BY-SA unless otherwise noted.