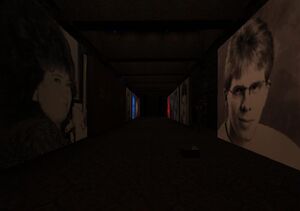 The id Gallery is an Easter Egg secret area. It is a long corridor found in the Boss2 map. In it there photos of the people who created Quake II. Some of the pictures are missing and some have interactive properties, used via buttons or by touching the photo.

Main articles: The Final Showdown, Jorg, and The Makron

The id Gallery is located under the arena where the player confronts the Makron in the stories final level. Once the Makron has been defeated, go into the tunnels below the arena floor and follow the path to where there are bullet and rocket ammo. The wall at the very end should be sparking so shoot it and it will explode. Continue down this path to the id Gallery.

The People behind Quake II

As if the id Gallery wasn't secret enough, there is another secret area beyond the id Gallery. When the player activates all the switches, a floor panel at the far end of the gallery will explode, revealing ladders which go even further into the asteroid. Climb down the ladders and follow the path to a large pool room. On the far end there is a Tank with two Iron Maidens on him a marine prisoner on either side.

Whilst the marines are just like others, they shout in pain and wish for death, the 'Tank Pimp' will not attack and can not be killed. It seems to be far more interested in making Strogg love with his women.

It is interesting to note that in Quake 3 Arena, it is stated that Tank Jr. is the offspring of a Tank Commander and Iron Maiden. Whilst it can be said that Tank Pimp could very well be Tank Jr.'s father and one of his Maidens his mother, there a few details that do not back this up. Firstly, the Tank Pimp is a normal Tank and not a Tank Commander. Secondly, the asteroid base blows up when the player exits via the escape pod which would kill Tank Pimp then and there. But there is also no evidence to say whether they do die or not, or if they really are Tank Jr.'s parents.

Retrieved from "https://quake.fandom.com/wiki/Id_Gallery?oldid=73159"
Community content is available under CC-BY-SA unless otherwise noted.