In Quake 2, an Iron Maiden is a Strogg based off of a female human, based on the fact that an Iron Maiden will utter the English word 'Traitor' on visual contact with the player. It has a Rocket Launcher for a left arm and a hand with bloodied sharp claws for its right. 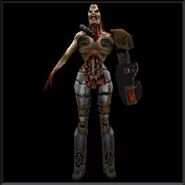 Iron Maiden's texture map when injured
Add a photo to this gallery
Retrieved from "https://quake.fandom.com/wiki/Iron_Maiden_(Q2)?oldid=81695"
Community content is available under CC-BY-SA unless otherwise noted.