Anderson comes from an affluent family, using his grandfather's position as a General in order to reassign himself into Rhino Squad after joining the Space Marine Corps. Prior to the invasion of Stroggos, Anderson had been in Rhino Squad for a year despite Bidwell's harsh training.

During the invasion of Stroggos, Anderson remained at the Rhino Squad crash-site with Sgt. Morris, attempting to stabilize Medic Metcalf's collapsed lung. Afterwards, he is brought by Matthew Kane to attend to Pvt. Chase's leg injuries, later he disappeared until the Operation: Advantage. After Kane is Stroggified, Anderson is present in his rescue and by request of 1stLt. Scott Voss identifies Kane's neurocyte as inactive and tries to escort him to Falcon Five for a medical evacuation. After the dropship is destroyed, he attempts to return back to Rhino Squad with Kane, but is ambushed and killed by a Strogg Scientist who drags his corpse away for producing even more Tactical Strogg. 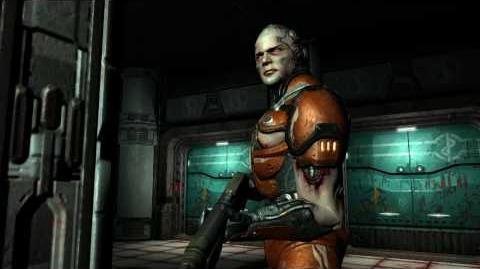 Quake 4 Anderson Death
Death scene of Anderson.
Add a photo to this gallery
Retrieved from "https://quake.fandom.com/wiki/Jeremiah_Anderson?oldid=82457"
Community content is available under CC-BY-SA unless otherwise noted.