In Quake 2, the Jorg is a Strogg exoskeleton piloted by the Strogg leader, the Makron. The Jorg is one of the most powerful Enemies faced in the game, second only to the Makron himself.

After destroying the leader's communication, Bitterman chases the Makron to the rooftop of the Palace and through a teleporter that leads to the Final Showdown. It's here that the player confronts the Makron one on one.

The Makron will always go into battle piloting the Jorg and will use it until it succumbs to damage, at which point the Makron will dismount it and attack the player on his own. 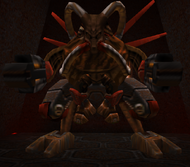 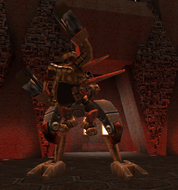 Makron prepared to fire its BFG from the Jorg 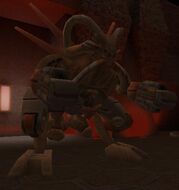 Jorg's texture map when injured
Add a photo to this gallery
Retrieved from "https://quake.fandom.com/wiki/Jorg?oldid=81673"
Community content is available under CC-BY-SA unless otherwise noted.