In Quake, a Knight is an armored Monster that wields a sword. It only has melee attacks, but it is quick and can easily catch you if you're not careful. The Knight is only found in levels which are predominantly Medieval themed. 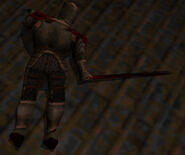 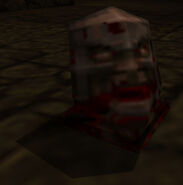 Texture map of the head
Add a photo to this gallery
Retrieved from "https://quake.fandom.com/wiki/Knight?oldid=80549"
Community content is available under CC-BY-SA unless otherwise noted.