The LaserGun is a Weapon that appears identical to a Thunderbolt but fires projectiles similar to those found in an Enforcer's rifle. This Weapon is selected by pressing impulse 9. This Weapon was made by N-Tropy on July 27, 1996.

The original "All Weapons" cheat has been changed to another impulse key, either 13 in the original modification or 17 in the Smart Weapon Patch.

Unlike the Enforcer's Weapon, however, the LaserGun projectile does not make a sound when it collides with a surface.

Note that neither modification includes any support for death messages, meaning the player will instead get the name of the target and the name of the attacker with no spacing.

Designed to be the Weapon held by the Enforcer, it will fire energy bolts and consume Cells. If the player is using the Smart Weapon Patch variant, they will find that Enforcers now drop this Weapon on death. Combined with the fact that there tend to be a lot of Enforcers in idBase levels (except E1M1: the Slipgate Complex, which will not provide any Cell ammo and thus the player cannot use said Weapon) and the fact that each LaserGun gives the player 15 Cells on top of the Backpack that drops an additional 5, players will find that they start with a surplus of Ammo before it drops off after the initial idBase level of each Episode.

Designed as a slightly weaker variant of the standard Thunderbolt, it will cost two Cells per every shot, yet cause 10 less damage than two Cells if fired by the standard Thunderbolt. This means that it is generally useful for concentrated bursts (and more controlled Ammo consumption than the Thunderbolt itself), but is not as good for causing a fast amount of damage to a stronger foe such as the Shambler.

Note that the Knight and Death Knight has very shiny armor that can reflect the beams of light fired by this Weapon. While not invulnerable, it will take a lot more shots to take down this opponent than normal if they player attempts to use a LaserGun.

While this Weapon does fire slower than the standard Thunderbolt, it still is about as fast as a Super Nailgun, meaning it still can be quite applicable for rapid fire purposes. Of course, due to the loss of 10 damage per shot over the Thunderbolt, it is not ideal to use this Weapon if they player has that as well.

The Smart Weapon Patch, made on September 1, 1996, included an updated version of the LaserGun modification with various changes made by SoniC. 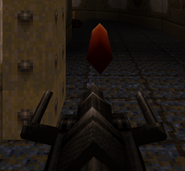 Texture map of world model
Add a photo to this gallery
Retrieved from "https://quake.fandom.com/wiki/LaserGun?oldid=83480"
Community content is available under CC-BY-SA unless otherwise noted.