The Laser Cannon is a Weapon introduced in Scourge of Armagon. It is a large firearm that fires 2 lasers per shot at a high rate (each shot only consumes one Cell, despite firing two). The lasers ricochet off walls and around corners making it useful for hitting Enemies out of sight.

Unlike the Thunderbolt, it will not create an explosive discharge when fired underwater. This is probably because it fires laser projectiles instead of emitting lightning.

If a laser beam does not make contact with anything within five seconds, it shall disappear.

Armagon has two arm mounted Laser Cannons, which he most often fires as single shots, but will sometimes fire rapidly.

The Laser Cannon is found relatively early on and is useful for plowing through large groups of weak enemies, and finishing off strong monsters like the Shambler and the Vore. Most of the time it can be used as a stronger alternative to the Nailgun, but its bouncing shots also make it useful for hitting enemies around corners. Try not to be careless with it, because its shots are likely to bounce into you instead. 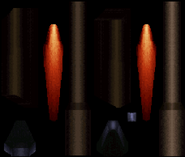 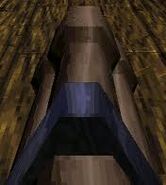 Laser texture map
Add a photo to this gallery

Retrieved from "https://quake.fandom.com/wiki/Laser_Cannon?oldid=74163"
Community content is available under CC-BY-SA unless otherwise noted.