The Laser Gun is a Weapon that is found in the P.A.I.N Combo Patch. This Weapon behaves similar to the Shotgun, but uses a different texture and fires projectiles similar to those fired by an Enforcer. There is no collision sound.

While taking the slot normally reserved for the Nailgun, this Weapon actually replaces the Super Nailgun. Unlike either, it uses Cells.

Note that the obituary for the Type C Laser Gun refers to the Weapon as a "Pulse Rifle". This appears nowhere else, the pickup message states Laser Gun, so it can be assumed this is erroneous.

As the mechanics are identical to that of a Shotgun, it is relatively easy to fire. The main difference is that while a Shotgun is hitscan and thus distance matters little, the Laser Gun requires time to get to its target, meaning it might be less useful against a fast moving opponent. As the main benefit of the standard Shotgun is sniping, this means it can serve little purpose in Type C.

Much like there is a Double-Barrelled Shotgun, there is a Super Laser Gun for Type B, with a changed model reflecting the difference between the types. Note that the only difference is that it fires two projectiles at once instead of one, meaning it can cause twice as much damage for twice the Ammo. The only difference is that it takes less time to cause the damage of a Throwing Axe, which means it remains just as useless as Type C while wasting even more valuable Cells.

Type A is, as usual, the most powerful form. Switching back to the standard model, the Weapon changes from being Pump-Action to Automatic, thereby giving the player a Rapid-Fire Laser Gun. Ammo will fire at a very rapid rate if the player holds down the attack button, about the same speed as a Super Nailgun. This means the rate of fire is still slower than the Thunderbolt. Furthermore, the Cells do not do as much damage, even in Type A. However, the Type A Rapid-Fire Laser Gun can be seen as a slightly better form of Super Nailgun, causing at least 2 more damage per shot while consuming half the Ammo. This means in cases where distance and rapid fire matters, it might make sense to use the Type A Laser Gun.

The original version of this Weapon appeared in Skarmod. It caused 30 damage per shot and was held by the player at all times. The mesh was made by Agust, a friend of Sigurdur G. Gunnarsson.

This Weapon was highly updated in the P.A.I.N Combo Patch. Most of what the original version contained was completely overhauled.

First Person View. Note the altered icon and placement on the HUD. 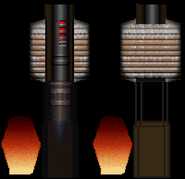 The Super Laser Gun texture map.
Add a photo to this gallery
Retrieved from "https://quake.fandom.com/wiki/Laser_Gun_(P.A.I.N)?oldid=84220"
Community content is available under CC-BY-SA unless otherwise noted.