Lava is a common, yet incredibly lethal Fluid found throughout the levels of Quake. It causes damage as soon as the player sets foot in it and can kill you in seconds, even with Armor. It injures the player at a much faster rate than Slime, although a Biosuit will reduce the Lava's damage rate to that of the latter fluid. The only way to survive in it is with a Pentagram of Protection.

Flaming rocks, known as Lavaballs, also commonly bounce out of Lava and may hit the player unexpectedly; however they are rather easy to dodge.

Chthon, the boss of Episode 1, resides in a giant pool of this substance.

Monsters are not harmed by contact with Lava, although they do take damage from the Lavaballs.

By falling into the Lava

By dying by a Lavaball 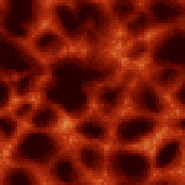 The texture for Lava

Texture map for the Lavaball
Community content is available under CC-BY-SA unless otherwise noted.
Advertisement