The Machine Gun Guard will attack the enemy by firing its Machine Gun in a random sucession ranging from 4 bullets (8 damage) to 11 bullets (22 damage). It is fairly easy to dodge its attack, although compared to all of the hitscan weapons the other enemies use, this is the most difficult to dodge.

The Machine Gun Guard prefers to close the gap between him and his opponents to give him better accuracy. 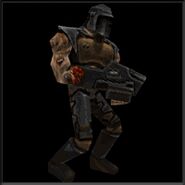 Machine Gun Guard's texture map when injured
Add a photo to this gallery
Retrieved from "https://quake.fandom.com/wiki/Machine_Gun_Guard_(Q2)?oldid=84544"
Community content is available under CC-BY-SA unless otherwise noted.