In Quake 4, the Makron is the supreme leader of the Strogg, and also serves as the guardian of the Strogg Nexus and is one of the game's two final bosses (the other being the Nexus itself). Different from the one previously seen, the Makron is a larger, more powerful version built or elected to replace the previous Makron. This Makron has a noticeably more sadistic personality, often laughing maniacally and shouting out phrases such as "die human!", "you will fail!", and "you cannot win!".

In contrast to the previous Makron, which was an organic brain housed inside a robotic battle suit, the current Makron has an organic alien head and torso, encased in a gigantic, heavily armored robotic torso, and four spider-like mechanical legs. It stands roughly 20 feet tall. In the center of the Makron's torso is an attached Human Torso Unit serving as an extra power supply. 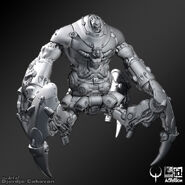 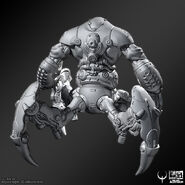 Concept Art of Makron back. 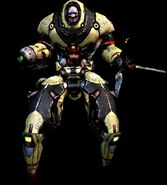 Ditto.
Add a photo to this gallery

Retrieved from "https://quake.fandom.com/wiki/Makron_(Q4)?oldid=82953"
Community content is available under CC-BY-SA unless otherwise noted.