In Quake 2, a Medic is a centaur-like Strogg with an ape-like posture that has a rapid-fire blaster for a right arm. It can fire this blaster in a fashion similar to a Blaster Pistol, or fire it rapidly like a Hyperblaster. As the name suggests, the Medic's primary purpose is not to directly engage enemies but to keep other Strogg in fighting shape. It has the ability to revive any enemy in the game as long as its corpse is not gibbed. As soon as it sees a corpse, it'll make a beeline towards it. As it's reviving an enemy, the enemy will glow bright red. 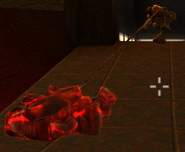 A medic reviving an enemy. 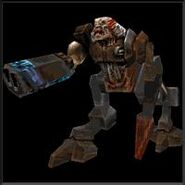 Medic's texture map when injured
Add a photo to this gallery

Retrieved from "https://quake.fandom.com/wiki/Medic_(Q2)?oldid=81692"
Community content is available under CC-BY-SA unless otherwise noted.