The Mjolnir is a large hammer which emits lightning upon impact against a solid surface, provided the user always has at least 15 Cells. Alternatively, it can function as a simple melee weapon. It is evidently inspired by the hammer of Thor from Norse mythology.

Like the Thunderbolt, it will create an explosive discharge if used underwater (but only if player has enough cells to use its lightning attack). It also suffers from the zombie Thunderbolt bug, where the player enters a zombie state if killed but not gibbed by the discharge.

The Mjolnir is one of the three Weapons that cannot be stolen by the Gremlin in Scourge of Armagon. The other two are the Axe and the Shotgun.

It and the Axe are the only melee Weapons in Quake. If the player runs out of ammunition for all other weapons, the Mjolnir will be equipped automatically instead of the axe. 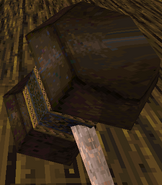 HUD icon (prepared)
Add a photo to this gallery

Retrieved from "https://quake.fandom.com/wiki/Mjolnir?oldid=89372"
Community content is available under CC-BY-SA unless otherwise noted.