The Mummy is a semi-boss enemy in Dissolution of Eternity found in Curse of Osiris. The Mummy is much like the Zombie in its appearance and animation; it even has the same attack and makes the same noises. However, the Mummy is much stronger and can take a very high amount of damage.

Much like the Zombie that the Mummy is based off, it has just one attack, which is to throw its gibs at the player. But while the Zombie's gibs do 10 damage, the Mummy's does 17-29 damage, which is almost as powerful as a Vore's energy pod. Nevertheless, the Mummy's gib throw is still just as slow and easy to dodge and thus isn't much of a threat. Its main purpose is to be a bullet sponge-type enemy, because of its unusually high HP. However, unlike the Zombie, the Mummy will not resurrect when killed. 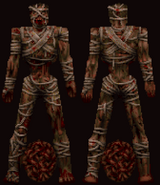 Texture map
Add a photo to this gallery
Retrieved from "https://quake.fandom.com/wiki/Mummy?oldid=85403"
Community content is available under CC-BY-SA unless otherwise noted.