In Quake II, the Mutant is a large, grey creature that only uses melee attacks. It can pounce and slash you.

It's notable for being one of only three known examples of native Stroggos fauna (the other being the Barracuda Shark, and the Gekk, found in The Reckoning) to have survived the global industrialization programs of the Strogg, which has heavily polluted so much of Stroggos.

Mutants only appear in the Prison and Mine hubs. Only a single one appears in Ground Zero hidden in a secret area.

The Mutant can move at fast speeds making an easily heard, unique sound. Once the Mutant has seen the player, it will run around until it has a clear path between it and him/her and jump at the player if he's/she's within range. This first pounce can deal between 40 to 50 damage and then it will begin its claw attack without delay dealing 10 to 15 damage in very quick succession. The damage from the pounce added to the damage from the claws can become immense if the Mutant isn't dealt with quickly. If the player is backed into a corner and hasn't got a decent weapon at the ready, the Mutant will easily tear him/her to shreds. 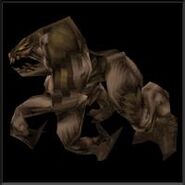