Nexus Core is the 30th and second last level of Quake 4.

Previously, Matthew Kane has activated the three towers that will deactivate the security toward the Nexus and defeated the monstrous Network Guardian. Now, the gateway to the Nexus is finally open as only he can go in where others have failed, due to requirement Strogg DNA, which Kane obtained in his transformation. Now, Kane have entering it as the enemy forces are awaiting for him inside...

At the start of the level. You have a transmission from Strauss to tell you about he is no longer to guiding you from now onward. Except only cheat chatting. Head straight and go left. Where you see the door open. But it was shuttled as enemies start to spawn at your back. Quickly of getting rid of the Light Tank since the space is very small. Once you take it out, focusing on the Tactical Strogg as they have Railgun on it as you will lose life if you not be careful especially on the highest difficulties. Once you taking care of them. Head through the door where they come and prepare more enemies after deactivated the entrance and head left. Where see the guard awaiting. Take him out and get ready for the elevator. Where it have Light Tank and Tactical Strogg equipping with railgun. Stay on your toes and flank them down. Highly recommend take on the tank first as it will charge you once it reach the floor. Once you taking out that freak and focusing on the Tactical as you need to be very careful. After you taking out. Grab any supplies from back there and head through the elevator. Where it slowly descend toward down.

While going down slowly, Guards will begins to break the glass to come after you one by one at the dark. Take out your machine gun to take them out as you descending with each one come after. When you're have reached at the bottom. Get ready for the a pair of Iron Maiden and Gladiator as they will pinned you down like nothing you ever see before. Just stay on your toes as you will eventually take them out. Afterwards, grab any supplies that lying on the ground before process. Once you enter the door, where the gladiator come. Change it to explosive weapon as Teleport Dropper quickly take it down. Otherwise, you will be overwhelming by a lot of enemies. After you have taken care of it, process to doors in-front twice. There you will see teleporter are spawning tactical strogg as this one cannot be destroy as it must wipe the enemies in old fashion way. Quickly go over there where they spawn and take care your shotgun. So that, where they have arrive, you have wipe the out with 2 or 3 shots depended on the difficulty setting. Once you defeat them. Go through the other side and activated the elevator to go up after you reach it. Use the Dark Matter Gun to obliterate the entire Tactical Strogg group as It is not worth of your time to use small arm against them. Afterwards, head through both doors. Where you will see another elevator that take you down to the Nexus. Once you reach down, Makron noticing you after scanning experiment. As he have locked you down and you must unlocked by yourself. While doing that you have face more enemies foes in a tight room with Gladiator and Tactical Strogg from both left and right. Take on the Gladiator first as it threat are more major and later you can slowly deal with the Tactical. Right after taking care of them. Ground starting to explode as Iron Maiden below rise up. Be careful of her as the room make a great advantage against you. Just use the shotgun to blast her away if she is getting close. Once she is dead, head through the at the bottom, where she have destroy. Where you will find the ladder to climb up as you reached the top take the supplies that scattered to the left and Head straight. Where you will encountering Tactical Strogg and Gunner to pinned you down. Take your weapon of choice to finish them presumably Rocket Launcher or small arms (Machine Gun, Hyperblaster and Shotgun) to take them out. Once you defeat them, iron maiden showed up again flank on her movement until she is dead. As you process, you encounter more Tactical Strogg hiding from corner to ambush you. Go over them and take them out as you go through another elevator that will reach to the control room that will unlock the security that Makron just locked, Once you disabled it, return to where you from as you encountering the same kind of enemies with Gunner and Guard. Simply just blast them away with the Dark Matter Gun and you have no problem with it. Be sure to grab any supplies in case if you missed it as just now you're full or didn't get hurt before you process.

Once you return back, you can go through the left door that have locked. There you inside a Big Chamber awaits you to do battle against three of the most heavy of the enemies that is going to spawn as the doors locked.

First is the Light Tank. Equip it with lethal guns presumably the shotgun, hyperblaster and rocket launcher to be to counter them as they will pinned you down if you not prepare yourself. Once you kill one another one will quickly re-spawned, take the one that is going to be dead. Before you take out the another one with the full life. Once taking out, focusing on that without hesitation as you need to stay on your toes the second is the Heavy Hover Tank with two appeared after you dispatch the last Light Tank. Equip with your nail gun or Dark Matter Gun against them, that is the best way to against them since it can homing at them in mid range while at the same time disable their tank missile that follow you. Focusing on one first before taking the other. Once you taking out, another one will re-spawned simply following the same strategies against the one before against the new one until they dead. Third and final is the Stream Protector right after you take out the Hover. However, this one is much simple as the target is bigger easier to take it down. Take out your Grenade Launcher and fire as their movement is slow. Until they crumble to the ground. After, you have taken all the three elites that the enemy have offered. The door from the other side is unlocked. be sure to grab anything on the chamber room before you process. Once you done it go through that door and grabbing health and armor as you will see another complex of the spectacular technology as Strauss transmission head in as you continuing process to the top by railing and pile that connected each other. Once you reach to the top. Get ready for your Dark Matter Gun as the whole squad of Tactical Strogg are all equip with Rail Gun that can be real threat to you as they appear. Just simply fire it and let the Blake hole take care of everything. Beware, some of them may take cover at the right door to avoid the attack. Better be careful. While dealing with them. After that, head through in-front at the right. Where the enemies will spawn again with gladiator, Light tank and a bunch of Tactical Strogg for the final purse. Quickly take out your Dark Matter Gun and blast them as all the tactical Strogg will gone with left with gladiator and the light tank to deal with, focusing on one recommended the light tank since it can chase you down. Take him out before it get you as he come after you as the shot did not hit you. Once taking care of him, the gladiator won't be a problem with it. Grenade Launcher are the best way to deal fire until it dead. Later, head through the ladder going down to grab the armor and come up to process. Once you're inside it refill your health and take any supplies if you running out of ammunition. Head through another door that will lead to the Nexus itself and the level end. 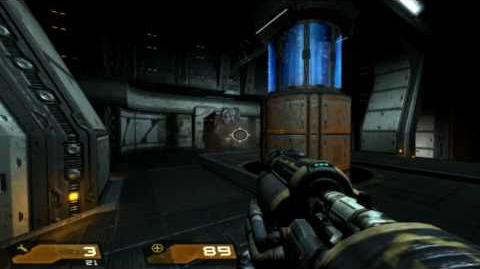