In Quake, an Ogre is a chainsaw-wielding creature that uses a Grenade Launcher as its long-distance weapon. Unless gibbed, they drop a Backpack containing 2 Rockets upon dying. The Ogre is one of the most common enemies found in Quake.

Strangely, while all other Monsters (except for the Grunts and Enforcers in the Base levels) feature melee or supernatural forms of attacks, the Ogre is the only one with relatively modern weapons. This was an attempt to take a fantasy creature and make it "bleed into the real world" [1].

On the Ogre's brown shirt has a small Quake symbol in the centre.

Character sheet of the Axe Ogre.

A pre-release shot of the Axe Ogre. 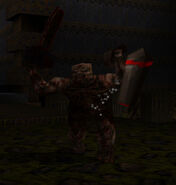 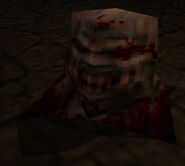 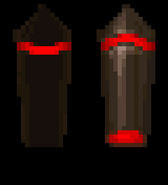 Texture map of the Grenade