The Overlord is the leader of the Wrath and possibly the replacement for Armagon as head of Quake's forces. After Shub-Niggurath's death, the Overlord captures some of Earth's technology and builds a time machine so he can alter world history. Warriors from Earth attempted to stop him but they are possessed by the Overlord and turned into Quake's Guardians. Around the same time, Ranger arrives in the new reality after defeating Armagon and starts one final journey to destroy the Overlord and his pet dragon. The Overlord resides in his tomb which is last level of the first episode of Dissolution of Eternity. The Overlord is the first boss enemy of the game and final challenge for Episode 1: Hell's Fortress. The Overlord returns in Episode 2: The Corridors of Time because the player is back in time and has to confront him again.

This robed skeletal figure ominously floats with the environment. His attack is a ball of energy which tracks the player and detonates on impact.

The Overlord possess two attacks, he can launch fire balls like the Wrath, whose are very similar to the Vore's energy pod.

Launches a red energy ball which homes in on the player much like the Vore's attack.

A melee attack when the player gets too close. 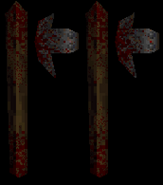 Third & final giblet (backbone)
Add a photo to this gallery
Retrieved from "https://quake.fandom.com/wiki/Overlord?oldid=85404"
Community content is available under CC-BY-SA unless otherwise noted.