In Quake 2, a Parasite is a four-legged cyborg with a human head. To attack, it launches an organic tube at you and drains your health. The Parasite can be knocked over from an attack, but the tube won't detach from you until it's done draining your health points or it's dead. 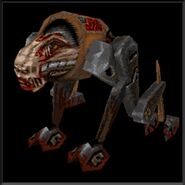