Phobos appears in and is a playable character in Quake 3 Arena. He is the third bot to be played against 1-on-1. Phobos is harder than the previous encounter with Ranger and if he sees you he will engage on lower difficulties. As difficulty goes higher you can notice him using small weapon combos on you by swapping them to deal maximum possible damage regarding range.

This fight serves as a small infusion of noises and introduction of goodies. As it's the first 1-on-1 encounter with a powerup in the arena, as well as first one to home a small body of water in the middle. He also gets mentioned in the chat as "Colonel", "Colonel Feeble", "Colonel, Sir" and "Feeb'o's". The possible nicknames are just a reflection of how he trusted his superiors who led him into a condo of hellspawns just to be ambushed and regurgitated by bellows of hell.

An experienced veteran, he led the invasion of the demon-haunted tunnels of Phobos. There, he was betrayed by superiors who thought they could learn more from watching him die than by studying his reports.[1]

A courageous, determined soldier, used to command, Phobos has got that "officer and a gentleman" esprit d'corps. Unfortunately, his last mission taught him about betrayal and sabotage. He trusts no one and nothing except his training.

Phobos first in the final rankings[]

Phobos neither first, nor last in final rankings[]

Hit while chat bubble was visible[]

Hit an opponent without killing them[]

Phobos kills someone with the Gauntlet[]

Phobos kills someone with the Railgun[]

The Plasma Gun is accurate when Phobos uses it, so stay away if he grabs it. The Shotgun is his favorite weapon so stay at a distance as he can quickly switch to it from time to time after pulsing you enough with Plasma beats from afar. When you manage to snatch the PG away from him, he'll eventually dive into the rocket launcher room to stock on bullets and RL, where you can cluster fire him.

When he's buffed he'll rush right to you with buckshot or plasma. Gathering all possible main Armor pickups in the map and keep him under pressure fire with plasma or rockets is the best way to keep him down. The long hall to the Rocket Launcher room and entire Plasma Gun area, will give him enough chance to catch you from a distance. You may need to figure out when to move away from his charge path if he ever manages to stock on both important goodies in the map.

A simple technique is timing the Haste right after a Heavy Armor pickup, locating him quickly for a few respawn kills and then timing the Heavy Armor at least once again before Haste expires. Grabbing Light Armor away from him gives you breathing room since he can be troublesome to dispatch when he eventually get his hands on the Plasma Gun spawn nearby. Grabbing the Light Armor destroys his chances of retaliation with a Rocket Launcher or PG. Be aware and try to pull the fight where you feel more comfortable, because his suppressing fire with PG definitely can hurt.

Preferably use the Plasma Gun to knock Phobos dead at the start or grab Haste and Heavy Armor before he does then try to get a bit personal. You can get on a shooting spree with the Machine Gun and Plasma Gun when you grab the Haste powerup as both firearms have plenty of ammo pickups in this map. It helps greatly to keep checking the Rocket Launcher room which you can leave as a bait to stock on bullets after the kill. If you ever need to get close, try to stick near the square flanks in-between the Haste chamber and RL room. As you dominate the Heavy Armor area, you can stick close to the square-shaped flank to combo Phobos easily until you get flushed out.

The map also allures the importance of listening to the environment. The Arena has a small waterway in the middle, where Heavy Armor resides. It's possible to climb up from the wall behind Heavy Armor spawn to reach the Haste area quicker. Water splashes are a clear indication of movement; anyone can hear someone running along the waterway if they ever stand around the Haste chamber and listen closely from the end of the waterway hall. 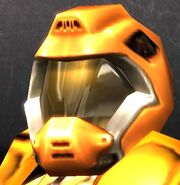