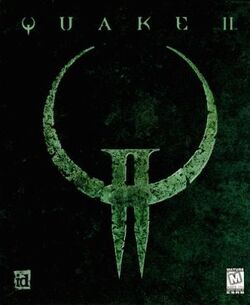 Quake II or Quake 2 was released on December 9, 1997. It was developed by id Software and distributed by Activision. Quake II isn't a direct sequel to Quake, it merely uses its name due to id feeling the game’s fast-paced, tactile feel felt closer to a Quake game than a new franchise. It also has two official expansion packs: The Reckoning and Ground Zero. These two expansion packs contain new levels, weapons, and enemies.

Quake II takes place in a futuristic sci-fi environment. During the single player campaign, you take the role of a Marine called Bitterman, taking part in "Operation Alien Overlord", attempting to save Earth from the Strogg invasion by counter-attacking their planet, Stroggos. During the first attack on Stroggos, the Big Gun strikes down most of the Marine pods with a powerful EMP blast. This causes most of the pods to crash land (many miles from their target landing zones). Most of the Marines are captured or killed, but Bitterman is one of the lucky few to survive. He finds himself many miles from the Big Gun in a Strogg base on the outskirts of the city.

Operation Alien Overlord has 4 key objectives that Bitterman must complete over the course of the game.

The player will complete other smaller objectives in between these four main objectives, such as destroying the Security Grid to gain access to the Big Gun. These objectives are spread over 10 Units. Bitterman starts off by establishing the communication uplink. This allows him to receive objectives deeper in the alien complex. Bitterman then reaches the Warehouse, and destroys the logistical train before walking through to the Jail. Here he completes one of the major secondary objectives, destroying the Laser Grid that protects the inner city from ground assault. Bitterman then makes his way to the Mine in order to reach the Factory. Bitterman disables the Strogg productions and then makes his way to the Big Gun. Bitterman destroys the Power Plant Reactor, granting him access to destroy the Big Gun. Thus completing the second main objective.

Bitterman travels to the Hangar to close it, and destroy the Black Hole Generator, completing the third main objective. He then walks over to the City Palace where the Makron resides. After destroying the Makron's communications, Bitterman chases the Makron through the Inner Chamber to the final showdown where Bitterman defeats the Strogg Leader, completing the fourth and final objective.

Quake II is a First Person Shooter, meaning the player must interact with the environment and fight the various enemies from the perspective of the main character. The game retained most of the original Quake features, including fast paced action, large quantities of enemies, and some of the weapons from the original game along with newly introduced ones.

The single player game features a variety of "levels" and "secret levels" that lead to the completion of the "main objectives" (usually destroying important Strogg structures). After the completion of every "main mission" a CGI cutscene introduces the next one. The player must fulfill various tasks including stealing a Strogg commander's head and blowing up the strongest Strogg piece of artillery: the Big Gun. The missions will lead the player to a space station, where the player will have their final showdown against the Makron. Even though a few marines survived the Big Gun at the start, the only ones you can see have been captured. You can also hear the voices of other marines on BitterMan's radio.

Quake II can be played across the Internet. It features various modes, from the free-for-all Deathmatch, to the single player Cooperative. Prior to the release of specifically designed Deathmatch maps, the players had to play their free for all games using the single player maps, which were not designed for multiplayer. The Quake II multiplayer mode retains some of the Quake mechanics like the improved speed, and the possibility to customize the player names and models. Quake II still has a large fan base and community, that provides the possibility to play Multiplayer matches even after 16 years from its first release.

The single-player levels of Quake II are grouped into 10 units. The maps within a unit are interconnected, and the progression through the unit can develop in a non-linear fashion; the Units are essentially large levels that consist of a few separate parts. Each unit takes place in a different part of Stroggos, starting from the Outer Base and ending in the Inner City. The Units take place in important Strogg locations, where key objectives to Operation Overlord are completed.

In Quake II, there are 4 difficulty levels: Easy, Medium, Hard and Hard+. The first three are chosen from the Singleplayer menu, and choosing one will begin a new game in that difficulty.

In Quake II, Easy mode is the only difficulty setting where the enemies will not try to shoot at the player when incapacitated.

Hard+ (the equivalent to Nightmare in Quake) is again hidden and can only be selected by typing "Skill 3" and then "Map Base1" in the console. This will put the player in the very first level with the difficulty of Hard+. Hard+ makes the enemy's attacks faster and causes the enemies to never flinch when shot.

Like Quake, Quake II has the player fighting a very diverse set of enemies from weak light guards to the powerful Makron. Click a link below to find out more about each of the Strogg.

Quake II is full of weapons that suit different situations. In order to survive through the alien installations, the player must master all the weapons, and find out which weapons work best against different enemies. Click a link below to find out more about each of the weapons and the ammo that fuels them.

Quake II offers a huge amount of power-ups to help the player combat the constant threat on the planet surface. These range from health packs and armor to special items like environmental suits which allow the player to walk harmlessly across toxic slime. These items are the key to getting across Stroggos alive and well.

The soundtrack of Quake II is composed by Sonic Mayhem , who offers a very different piece compared to Trent Reznor's Quake soundtrack. Whereas Quake's music is ambient and gives off the feelings of an atmosphere full of evil, ,Quake II is a very heavy metal sound with an emphasis on repetition of phrases. See below for a complete track list on the Quake II CD, which can be played on a stereo, or any CD player and ripped onto a computer.

When viewed using a computer disc drive, the disc contains 11 tracks although Track 1 is actually game data which cannot be played on audio players. The ten tracks listed start at Track 2 and go down to Track 11.

Quake II was extremely well received by reviewers and gamers alike. It sold over one million copies. Quake II was the most popular online game for all of 1998.

Several ports of Quake 2 have been released for other platforms.

Two official single-player mission packs were released, which detail the adventures of two other marines who landed on Stroggos at about the same time as Bitterman: Joker (The Reckoning), and Stepchild (Ground Zero).

There were also two unofficial expansion packs which came out on CDs.