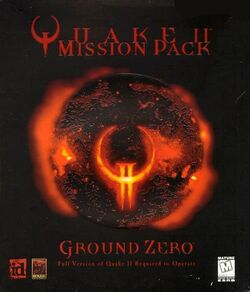 Quake II Mission Pack: Ground Zero is an official mission pack for Quake 2, developed by Rogue Entertainment and released on September 11, 1998 right after the release of the first expansion.

The Gravity Well has trapped the Earth Fleet in orbit above the planet. One of the marines who managed to land must now make his way to the Gravity Well to destroy it and free the fleet above and disable the entire defenses of the planet.

Ground Zero received mixed to positive review, as Gamerankings rated the game 65.40%, slightly lower than the first expansion. The considerably higher difficulty of the expansion compared to the first one and the base game was criticized. [2]

Retrieved from "https://quake.fandom.com/wiki/Quake_II_Mission_Pack:_Ground_Zero?oldid=86856"
Community content is available under CC-BY-SA unless otherwise noted.