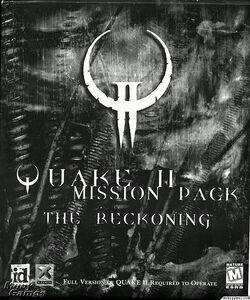 Quake II Mission Pack: The Reckoning is an official mission pack released for Quake 2, developed by Xatrix Entertainment Inc. and released in May 30, 1998.

The Reckoning follows Joker, a member of an elite squad of marines on a mission to infiltrate the Moon Base and destroy the Strogg Fleet there, which is preparing to attack. Joker crash lands in the Swamps outside the compound where his squad mates are waiting. Joker travels through the swamps and bypasses the compounds outer defenses and enters through the main gate. Joker finds his squad just in time to watch them get obliterated by Strogg forces. Joker escapes on his own to the fuel refinery where he helps the Air Force destroy all fuel production. Afterwards, Joker infiltrates the Strogg spaceport, boards a cargo ship and reaches the Moon Base, destroying it and the fleet.

The Reckoning adds nine new monsters to the Strogg army, although most of them are just upgraded beta class versions of old faces like the Gladiator and Iron Maiden. See below a complete list of the new enemies added in the Reckoning. Whilst they might only be better versions of the old, a few, such as the Gladiator and Super Tank have become even stronger than the original bosses of Quake II.

The game received mostly positive review as Gamerankings rate the score 69.50%. Due to the fact, it only expands the gameplay of the installment with nothing spectacular about it. [2]