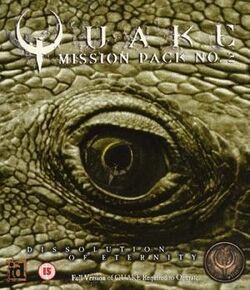 Quake Mission Pack 2: Dissolution of Eternity is the second official mission pack released for Quake, developed by Rogue Entertainment and released on March 19, 1997, an exact month after the first expansion.

Having defeated Armagon, the hero returns to Earth. However, things seem very wrong - apparently Quake has initiated yet another dark scheme to subjugate our world by altering the course of time itself. The hero is determined to put an end to Quake once and for all, and therefore boldly enters the dark realms again for one final confrontation to end the entire evil once and for all.

Just as in the original game, the game begins with an introductory level, where players choose their preferred level of difficulty and the episode they wish to play.

Dissolution of Eternity has a lot of new enemies for an expansion pack. Seven new enemies, seven bosses and one of Quake's evil devices.

While Dissolution of Eternity has no new Weapons, it has modified ammunition for pre-existing weapons, acting as alternative weapon modes. Players can alternate between the standard and new weapon modes by pressing the weapon selection key (e.g. press "7" to select the Rocket Launcher, then press it once again to switch to Multi Rockets mode).

The Rocket Launcher can now launch multi rockets, where it fires off 4 rockets in a single attack. Since these multi-rockets are a separate ammo stock to that of the basic rockets, not only can the player store twice as much ammo for the rocket launcher, he/she can pretty much kill any enemy without even breaking a sweat. Even the Dragon can be defeated with these easily on the lower difficulty levels. It isn't until you're playing on hard or nightmare that it will pose a real threat.

The game received favorable reviews as Gamerankings gave the game 83.50%, a slightly higher rating than the first expansion, but negative on the pack being so difficult to play. [2]

Retrieved from "https://quake.fandom.com/wiki/Quake_Mission_Pack_2:_Dissolution_of_Eternity?oldid=84748"
Community content is available under CC-BY-SA unless otherwise noted.