A container of Radioactive materials in Quake that is exclusive to the Base levels. It is a square metal box with hazard symbols on its sides. They come in two different sizes, although both are effectively the same. When they take a certain amount of damage, they explode, causing a large amount of damage to anyone nearby, including the player. At point blank range, the explosion will deal around 150 damage, easily killing nearby Rottweilers, Grunts, and Enforcers.

Radioactive Containers, unlike most other entities, do not respawn in Deathmatch. This means that they are a one-time use Hazard that can either be destroyed by those wishing to avoid being blown up or used strategically to kill others. 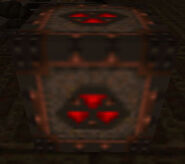