Ranger is the main character of Quake. While initially unnamed since the developers intended that the player should incorporate the character themselves, the story does refer to him as 'You' which further encourages the idea. He was eventually referred to as 'Quakeguy', 'Player ', 'The hero' (In Mission packs), ' Quake's Protagonist' or 'Marine', a character named "Ranger" appeared in Quake 3 Arena with the exact same appearance and a description that matches the events endured by the protagonist of Quake. He is the sole survivor of Operation Counter-Strike and his mission is to take down the enemy leader "Quake".

Ranger is voiced by Trent Reznor.[1]

Ranger is a marine in the special forces. He receives a telephone call at 4 A.M., and arrives at the secret installation by 5:30. The commander tersely explains that once they perfect the Slipgate device, they’ll be capable of utilizing them to instantly transport people and cargo from one place to another. But an enemy, codenamed "Quake", is using his own Slipgates to insert his forces inside of some of Earth’s bases in order to kill, steal, and kidnap. Being their "best man", Ranger is in charge of Operation Counterstrike, finding Quake, and stopping him. Ranger has the full authority to requisition anything that he requires.

Around the time of the Operation Counterstrike, he is one of the many marines sent to defeat the enemy leader, code-named "Quake". All marines sent through were killed, except for Ranger. Ranger then travels through 4 different dimensions, each more hellish than the last, to collect the four magic Runes that, when combined, will open the gate to the lair of Quake. In the second dimension, Ranger learns that Quake is actually Shub-Niggurath from Lovecraftian myth, the evil mother of all creatures. After collecting all 4 Runes, a large hole in the main dimension select room leads to Shub-Niggurath's Pit. Ranger cannot kill her with normal weapons, and must fight through many of her minions before finding the Teleporter that will teleport him to Shub-Niggurath's platform. He spawns inside the beast, taking up her space, causing her to explode, and leaving Ranger victorious.

Ranger appears to be a very muscular man wearing an advanced suit of brown combat boots and Yellow Armor. His pants are a bright shade of orange.These traits can be changed in the Multiplayer menu, but that does not have an effect on the main game. Judging by his status bar face, he looks to be in his mid-to-early 40s or late 30s. He wears an unique styled helmet which further covers his head traits. Ranger wears white gloves which are not seen when using the Axe, which he wields in his right hand.

His voice is fairly deep and low pitched, he will scream in pain if he experiences damage such as falling in hazardous materials such as Slime or Lava. When he uses the Ring of Shadows, it becomes apparent that his eyes are brown, although his gibbed head contains a few blue pixels. Curiously, his gibbed head is larger than that of his full model. His face can bleed purely by drowning.

In a similiar way to the protagonist from Doom, Ranger does not talk through the game. The players are intended to incorporate the character themselves. his goals often involve talking little and killing everything he comes across.

The Gibbed remains of Ranger

Damaged while near death

Possessing the Pentagram of Protection

Possessing the Ring of Shadows

Possessing both the Pentagram of Protection & the Ring of Shadows 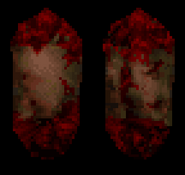