The Rocket Launcher, or "RL", is one of the most potent Weapons in Quake. Getting hit by one is a one-hit kill if you don't have any armor, and its splash damage can do the same if you're close to the point of impact. Unlike most other guns besides the Grenade Launcher, this gun will never switch automatically when the player runs out of ammo of all other guns.

The Rocket Launcher makes its first appearence on either Gloom Keep or Ziggurat Vertigo, depending on the exit the player takes on The Grisly Grotto. At Gloom Keep it is found easily accessible on the central area of the level before the two intersections leading to the Silver Key and the Gold Key. At Ziggurat Vertigo it is found in a place located within the corridors from where player first can come from.

Death by Own Rockets 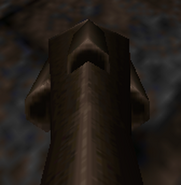 Texture map for the Rocket

The Soldier from Team Fortress 2 holding this weapon, known as The Original, during Quake 4's promotional period.
Add a photo to this gallery

Retrieved from "https://quake.fandom.com/wiki/Rocket_Launcher_(Q1)?oldid=85586"
Community content is available under CC-BY-SA unless otherwise noted.