In Quake, a Rottweiler is a blood-soaked possessed dog that can bite somebody for medium damage. They also can jump short distances for slightly more damage. They are often found alongside Grunts. The Rottweiler is exclusive to idBase levels and is the rarest enemy in the campaign.

When roaming around the level or when being aware of the threat, the Rottweiler will emit a low growling sound.

The Rottweiler will either do a quick roll or flinch in pain when hit by an attack. 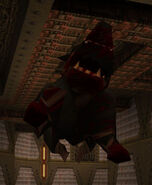 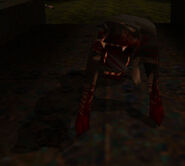 Texture map of the head
Community content is available under CC-BY-SA unless otherwise noted.
Advertisement