The Space Marine Corps Hovertank is a ground vehicle used during the Second Invasion of Stroggos.

The Hovertank is, as the name implies, a small battle tank. Rather than using wheels or caterpillar tracks like contemporary tanks, the SMC variant uses anti-gravity units positioned on the bottom of the tank's hull. These units let the tank float above the ground and give it its name. This ability to float also allow for much faster movement as the tanks are never touching the ground (and possible obstacles).

The tank's armament consists of a heavy main cannon for large Strogg units and a coaxially-mounted machine gun for smaller Strogg infantry or rapidly dispatch a group of Stroggs, the cannon is challenging to hit the agile strogg aerial units at long distances, since they are smart enough to dodge them. The cannon is fairly accurate though, the projectile will not drop until extreme distances, so you don't need to count its arc of fire. The cannon takes about 2 seconds to reload after each shot. The Cannon on the Hovertank has a scope for easier aiming at long distance, the scope is almost identical to the one found on Machine Gun, with a slightly higher magnification.

Like the Walkers used by the SMC, the Hovertanks utilize both a regenerative hull plating and energy shield. In order to illuminate dark areas, the tanks are equipped with a set of headlights.

The Hovertank is accessible throughout parts of Operation: Advantage, where the player has to make his way from the Perimeter Defense Station to the Tetranode. In these levels, the player must defeat a variety of Strogg infantry, ranging from foot soldiers like Guards to heavy units such as Heavy Hover Tanks, Convoys and Turrets. The foot soldiers lack the firepower to quickly inflict any serious damage to the tank itself, and only require short bursts from the machine gun to bring down. Alternatively, instead of using the machine gun to dispose of any Strogg infantry, the tank's speed and maneuverability can be used to simply run them over. Convoys and Turrets both pose a greater threat to the tank's armor and shielding, but use of the machine gun is still recommended as its high rate-of-fire help to offset accuracy issues when performing evasive maneuvers at close quarters, which is where most of these battles tend to take place. Strogg aerial units like Fighters and Hornets are too fast for the main cannon, even when you are not detected by them, they will be smart enough to dodge the cannon rounds. so use the machine gun or (on lower difficulties) ignore them completely. When fighting the Heavy Hover Tanks, try to force them into a corner with the machine gun and then use the main cannon as they cannot escape it, use the machine gun to destory their guided missiles. Occasionally, Strogg Troop Transports will be encountered. These are fairly slow and can be shot down with the cannon immediately.

Shortly before reaching the Tetranode, three Harvesters will be encountered. The first one is introduced via a cutscene and must be fought within relatively short range. Maneuver constantly to avoid the Harvester's blaster shots and maintain distance from the Harvester's legs, as their melee strikes are instantly fatal. Rely on the main cannon for damaging the Harvester itself, only switching to the machine gun to shoot down the homing missiles that the Harvester fires occasionally. The last two Harvesters can be spotted from a long distance, so this battle is far easier. Use the main cannon coupled with its zoom function to snipe at the Harvesters, maintaining distance and shooting down homing missiles with the machine gun as necessary until the mechanical walkers are destroyed. 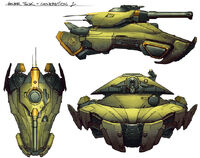 Concept art of the SMC Hovertank.
Add a photo to this gallery
Retrieved from "https://quake.fandom.com/wiki/SMC_Hovertank?oldid=89350"
Community content is available under CC-BY-SA unless otherwise noted.