In Quake, a Shambler is a large yeti-like beast with a blood-stained skin, a very large mouth displaying enormous fangs, no visible eyes, and sharp claws. The Shambler has a complete lack of facial expression. His furious melee claw smash does enormous damage, and at a distance, he can attack by projecting a beam of electricity towards his opponent. His electric attack will only work if he sees his enemy when it ends his charging up animation. Otherwise, he'll miss.

The Shambler feeds off the rifts in space-time that are created by the other Monsters. The Shambler is aggressive to anyone who intrudes with said rifts being created. [1] 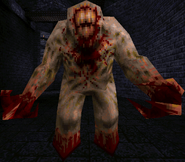 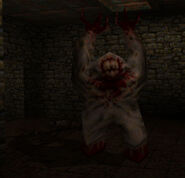 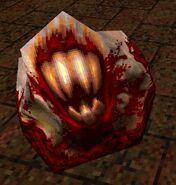 Texture map of the Shambler's Lightning

The Shambler surprises the player in Gloom Keep

4 Shamblers in the Palace of Hate on Hard/Nightmare

A Dimensional Shambler from Sandy Petersen's Field Guide to Cthulhu Monsters; the influence for the Shambler